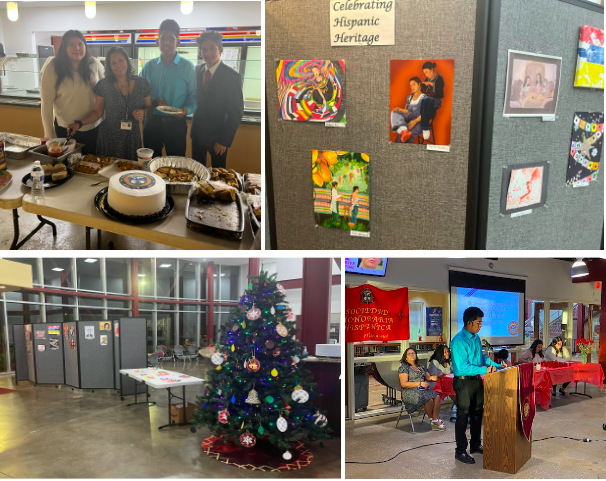 The induction ceremony featured SHH board members discussing the history and values of the organization, as well as honoring Norma Collazo-Matassini, former BDCHS board member and current education committee chair who acted as an influential figure in the development and success of SHH. Finally, the induction concluded with Advisor Señora Caraballo giving an overview of the BDCHS Spanish program, and inductees completing a candle lighting ceremony and reciting the SHH pledge.

Following the induction ceremony, attendees were invited to enjoy a potluck and play dominoes -an acquainting game popular in Spanish-speaking countries- as part of Noche Latina, an annual SHH event that celebrates Hispanic and Latin-American culture. Art projects in honor of Hispanic Heritage month were presented, and Hispanic foods such as croquettes, arroz con pollo, and pupusas were served. SHH inductee Doris Rizkalla called it a “memorable and uniting experience, bonding over a shared interest in Hispanic culture and cuisine”.

According to their website, SHH aims to “recognize high school achievement in Spanish and Portuguese and to promote interest in Hispanic and Luso-Brazilian studies”. SHH’s most recent project has been “the Giving Tree”. Found in the media center, the tree has “ornaments” with donation items, which will be given to the Citrus County Abuse Shelter Association(CASA), which works to provide a safe space for victims of domestic violence. Students can contribute to donations by borrowing an ornament, gathering the donation, and bringing it (the ornament and the donation) to Señora Caraballo’s room: Room 104. Donations also count for in-school service hours, with each item equating to 1 service hour (maximum of 2 service hours). The tree will be taken down by the end of this week; donations will be accepted until the final day of the semester, Dec. 23.

If you have any photos or information regarding BDCHS life to include in our next feature, please email smarcus@bdchs.org